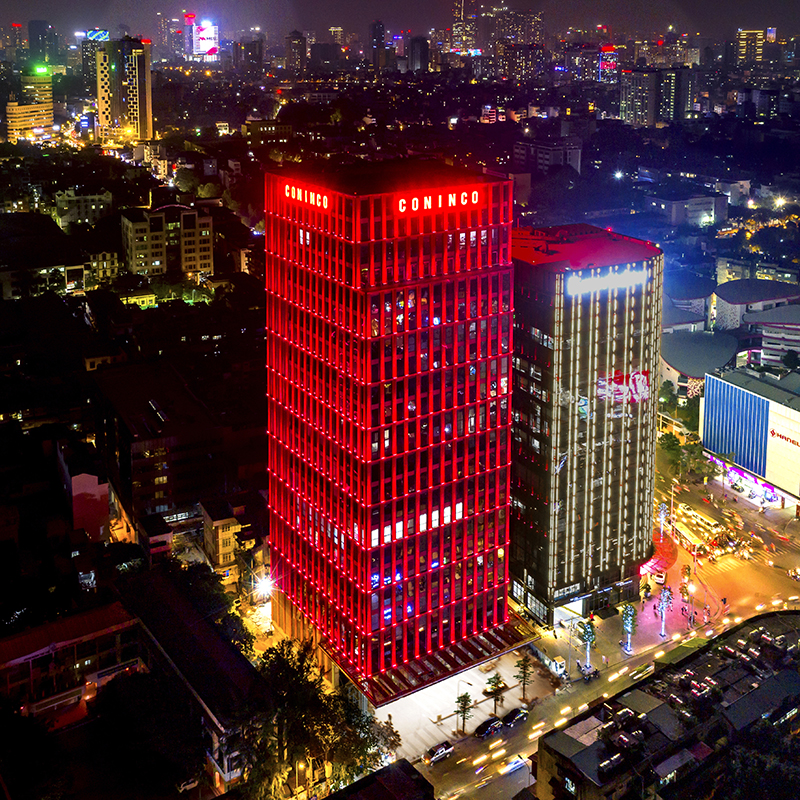 Consultant and Inspection Joint Stock Company of Construction Technology and Equipment (CONINCO., JSC) during the 43-year development, through many generations of leaders and employees with solid courage, collective intelligence and the spirit of solidarity has built CONINCO to develop together with the innovation of the country, creating a prestigious brand and trust for the customers. Up to now, CONINCO is one of the leading companies in the field of construction consultancy in Vietnam, always steadfast in the goal of sustainable development, assurance for the future.

CONINCO., JSC formerly known as Research Institute of Mechanization and Construction Technology was established on April 16th, 1979, during the past 43 years, generations of leaders and employees of CONINCO have strived to build and develop CONINCO into one of the leading construction consulting companies in Vietnam.

Taking the motto: "Global vision - Realistic action" and "The larger vision - The more effectiveness" as the guideline for action, CONINCO very early set out the development strategy of the company with a vision of 50 years, towards the goal of sustainable development for the Company, customers and the community, creating a healthy business environment, building trust among customers and shareholders; building a professional working environment, ensuring benefits for nearly 1000 employees to unleash their creativity and dedication. The quality of the works is the clearest proof of the prestige and capacity of CONINCO.

The past 43 years have been a long journey with many changes. Over periods of economic reform, the country's development policy, from a research institute, generations of leaders and employees of CONINCO have always inherited and promoted the tradition of solidarity, bringing enthusiasm, talent, and virtue together to build and develop the CONINCO brand name, step by step, to become one of the leading companies in the field of construction consultancy, and pioneer in expanding new consulting services, becoming a trusted address for Government agencies, ministries, branches, localities ... trust to implement projects associated with the development of the construction industry and big investment corporations such as: My Dinh National Stadium; National Convention Center; National Assembly House and new Ba Dinh Conference Hall; 108 Military Central Hospital; Headquarters of ministries: Ministry of Foreign Affairs, Ministry of Public Security, Ministry of Finance; Headquarters of the Supreme People's Procuracy; Headquarters of the Supreme People's Court; Office of the Government, Office of the Communist Party Central Committee, etc. CONINCO has implemented many civil and industrial works, traffic works, health care works…and almost all aviation projects across the country.

The success of each project CONINCO participates in, the trust recognized by leaders of the Party, State, Government, Ministries, Departments and Branches for CONINCO is also the success of the sustainable development strategy of the Board of Management, Board of Directors of CONINCO; is a proud result for the efforts of all members of the company who always bring the spirit of "unity - creativity - professionalism - dedication" to create outstanding values, dedicating to the prosperous development of the country.

CONINCO TOWER – Achievement for the tireless efforts of generations of CONINCO

43 years is a long enough time to affirm the quality of a brand as well as its position in the market. Especially after 15 years of equitization, CONINCO has created a firm belief in the industry, worthy of being one of the leading construction consulting firms in Vietnam. The CONINCO TOWER building project bears the imprint of CONINCO people, is an achievement for the tireless efforts of generations of CONINCO, a symbol of affirmation of the operating philosophy for sustainable development, assurance for the future of the Company.

Since the equitization in 2007 until now, CONINCO has always successfully completed the set plans, maintained a growth rate of 10-15%/year, fully paid the state budget, and maximized profits for shareholders and the Company, employees' lives are improved, ensuring the harmony of economic benefits with the interests of employees and sharing difficulties with the community.

The value of State capital at CONINCO has been preserved and developed, the total assets of the Company have grown tremendously over each period and up to now, the total assets of the Company have reached over VND 800 billion – That result confirms the right policy of the Party and the State in the process of equitization of state enterprises, the trust in assigning the task of managing State capital at the enterprise and the best efforts of the Board of Management, the Board of Directors and the employees of CONINCO.

Besides, during the development process, CONINCO has built a culture of "Sharing to connect", and that culture is increasingly promoted through volunteer, social, gratitude activities… Up to now, the CONINCO brand name is known as a consulting services provider that is "Experienced, professional, famous for its honesty and dedication to the community".

Reaching out to the world - Reaching great heights

Not only operating within the country, CONINCO is proud to be an effective business partner with many big companies and corporations in the world. CONINCO is also a pioneer in international business expansion and successfully implemented a number of typical projects such as: National Assembly Office of Lao PDR, Lao PDR National Center of Sports Training, Laos - Vietnam Friendship High School (Gift from the Vietnamese Party and Government to the people of Laos), High School in Luang Prabang, Dong Kham Xang Institute of Economics and Finance, Fourth Greater Mekong Sub Region Corridor Towns Development Project (GMS4-CTDP), Bokeo Province radio-television station,... and was honored to be awarded many noble awards by the Party and Government of Vietnam and Lao PDR.

Continuing the achievements, the Board of Directors and employees of CONINCO affirm that they will continue to pursue the selected missions and policies because that foundation has formed a highly humane corporate culture, creating a core value decisive for the sustainable development of CONINCO.

The journey to new heights will open many directions for CONINCO in the coming period. Under the management of the Board of Management, the Board of Directors together with the enthusiasm, efforts and unity of the Board of Directors and employees, CONINCO will continue to uphold the operating philosophy and persevere with brand declaration "Assurance for the future", for the sustainable development of the Company and the mission to the community, bringing the CONINCO brand name to spread all over the country, worthy of being a trusted brand with construction projects all over the country.