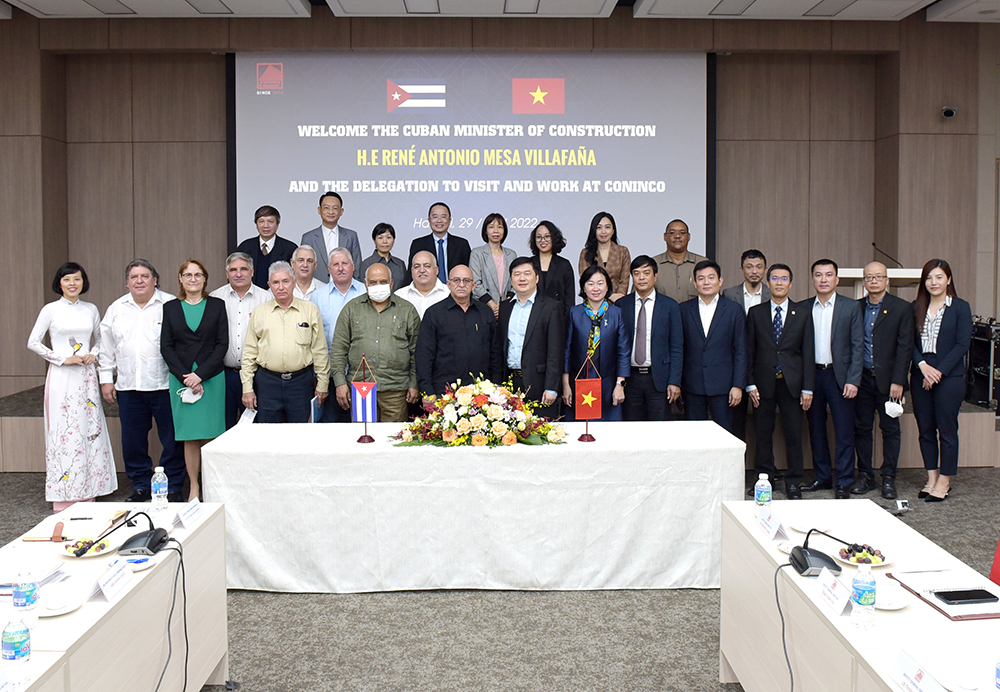 On the side of Ministry of Construction of Vietnam, there was Ms. Pham Thi Hong My - Deputy Director of International Cooperation Department. 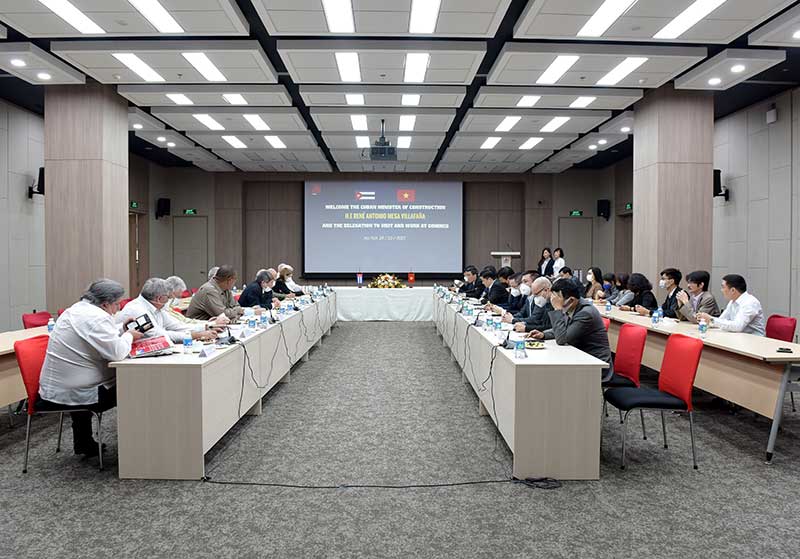 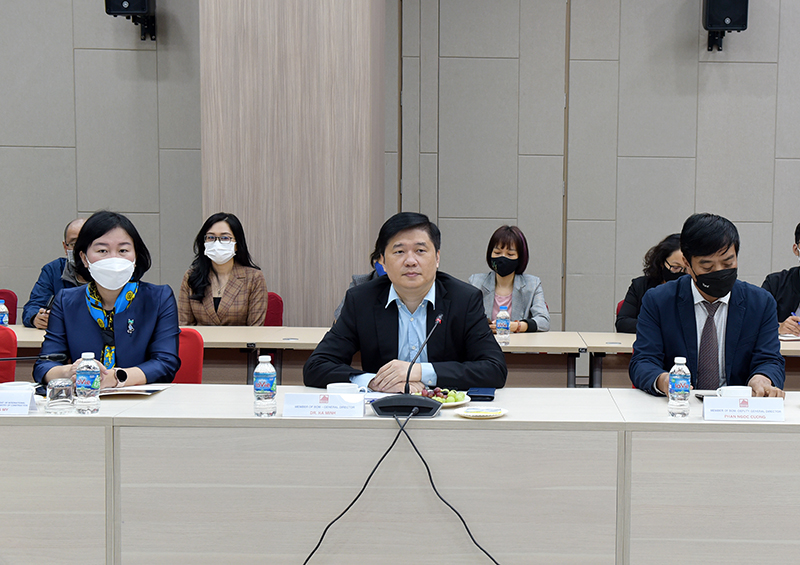 Dr. Ha Minh - Member of the Board of Management, General Director spoke at the meeting

Speaking at the welcome meeting, the General Director emphasized that with the traditional friendship between Vietnam and Cuba, the presence of the Minister at CONINCO is a great honor for all CONINCO’s employees. At the meeting, the General Director introduced to the delegation about the great achievements of CONINCO during the nearly 45 years of development that bring the CONINCO brand name to become one of the leading construction consulting companies in Vietnam, multi-disciplinary operation in domestic and foreign market, having effective cooperation with big companies and corporations in Vietnam and all over the world. With the philosophy “Assurance for the future”, CONINCO is oriented for the sustainable development of ourselves, our clients and the society.

After attending the working session between the Ministers of Construction of Vietnam - Cuba at the headquarters of the Ministry of Construction on the morning of March 28, CONINCO realized that now, Vietnam - Cuba has been cooperating closely and comprehensively in many fields as politics, economy, trade, science and technology... The leaders of the two countries shared the hope that the comprehensive partnership will be expanded, developed, and opening up new channels for cooperation between Vietnam and Cuba as well as strengthening the multilateral economic and trade relationship is the central policy of the bilateral development strategy of the two countries.

For the construction industry in general and CONINCO in particular, with the trust of the Cuban Ministry of Construction and the Cuban Embassy in Vietnam, on November 30, 2020, CONINCO and DINVAI Vietnam (representative of DINVAI CONSTRUCCIONES Company under the Ministry of Construction of the Republic of Cuba) signed the MoU in the presence of the Minister of Construction and Cuban Ambassador Extraordinary and Plenipotentiary to Vietnam. Although the Covid-19 pandemic caused many difficulties to the world economy, the cooperation of the two companies has made the first step through singing to provide construction supervision consultancy services in several projects. In addition, CONINCO has been looking for suitable projects at the request of DINVAI to continue to coordinate in implementation such as ODA-funded projects, transportation infrastructure projects and some overseas projects (Laos…). 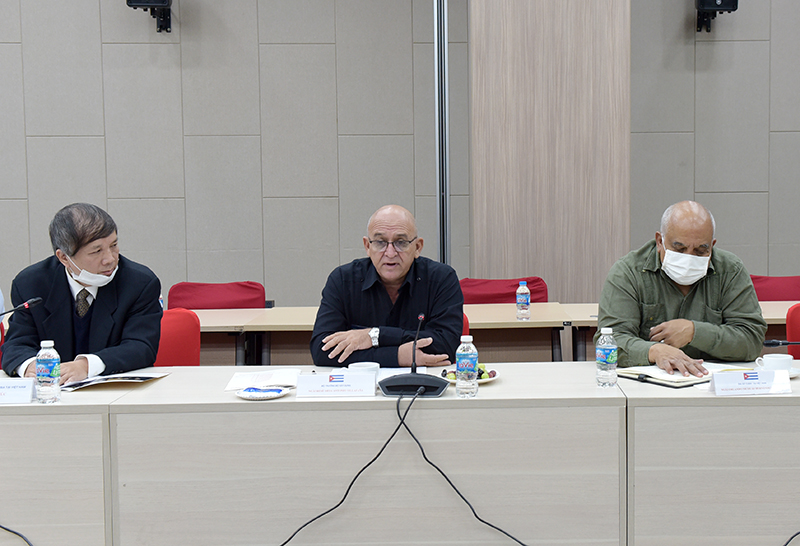 Impressed by the attentive and friendly welcome of CONINCO, the Cuban Minister of Construction shared that visiting and working in Vietnam is a special honor to show the long-standing and strong relationship between Vietnam and Cuba has existed for many decades. Particularly in the field of construction, since the late 60s and 70s of the last century, Cuban civil engineers have been in Vietnam to jointly build a number of traffic and civil works. The Minister assessed that this visit and work at Vietnamese enterprises is the most favorable condition for the two sides to expand further cooperation.

Appreciating the achievements CONINCO has achieved after watching the introduction film of CONINCO, the Minister affirmed that Cuba and Vietnam still have many opportunities to cooperate, especially with CONINCO, he exchanged ideas for cooperation in the near future. The Minister emphasized that, with a human resource for the construction industry of up to 12,000 engineers and architects, the Cuban Ministry of Construction is fully satisfied in terms of technical and professional capacity as well as other capabilities that can join CONINCO in implementing projects in many different fields: airports, bridges, seaports, healthcare, hotels and other industrial projects. With CONINCO's multi-disciplinary, multi-professional and diversified activities, the Minister hoped that on the basis of the Memorandum of understanding signed between CONINCO and DINVAI, the two sides would continue to have new cooperation in many future projects.

At the meeting, the Minister sent an official invitation to the CONINCO’s Board of Executive to visit Cuba so that CONINCO could visualize the Cuban capacity, potential, technology and people, contributing to promoting effective cooperation between CONINCO and DINVAI as well as between CONINCO and enterprises in Cuba. The Minister affirmed once again that the Cuban Ministry of Construction is ready to create best conditions for the cooperation between Cuban enterprises and CONINCO in both domestic and overseas.

On behalf of all CONINCO’s employees, General Director Dr. Ha Minh thanked the visit and work of the Minister, the Ambassador and the delegation at CONINCO. This is an important event, a mark of CONINCO, contributing to promoting investment, economic and trade cooperation between the two countries Cuba and Vietnam in general, between the Ministry of Construction of Vietnam and the Ministry of Construction of Cuba, between CONINCO and Cuban enterprises in particular. Once again, the General Director thanked the trust, cooperation, support and encouragement of the Leaders of the Ministry of Construction of the two countries, the Cuban Embassy in Vietnam, and hoped that CONINCO would continue to receive the support of leaders of the two ministries in the upcoming development steps. The General Director also thanked the Minister for inviting CONINCO to visit Cuba and will arrange work to visit Cuba at the most appropriate time. 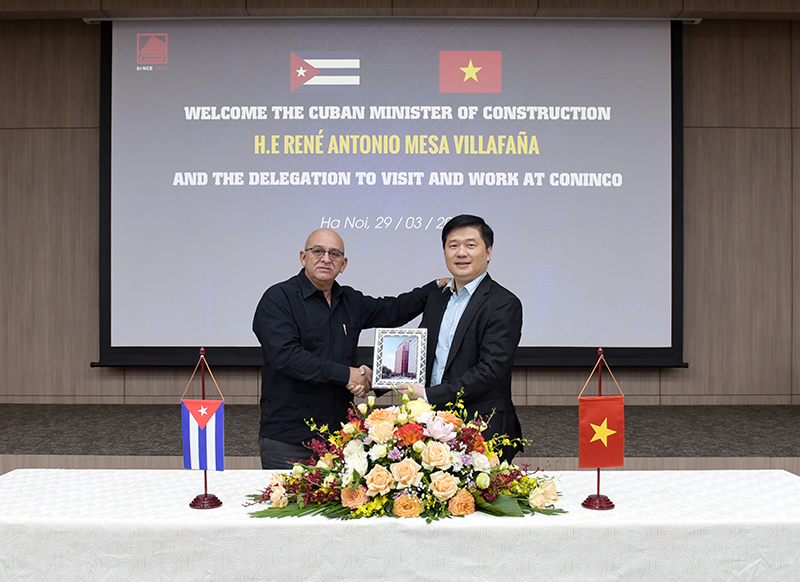 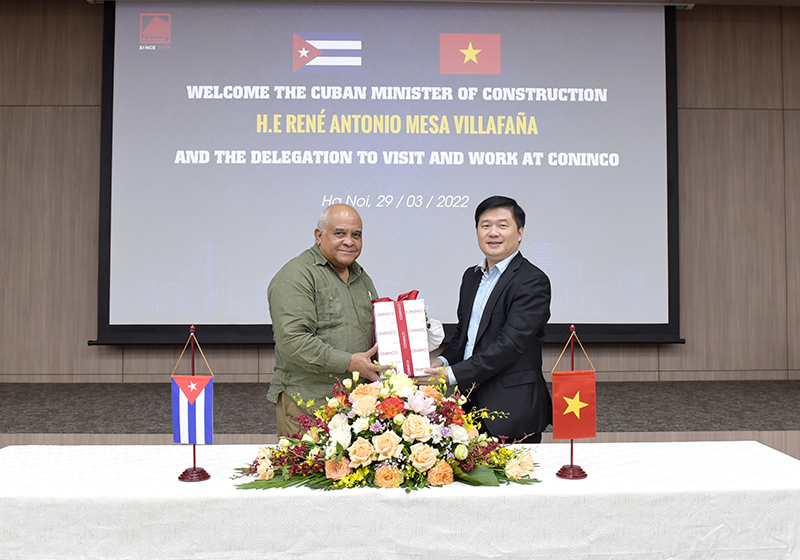 Member of the Board of Management, General Director Dr. Ha Minh gave gift and took photo with the Cuban Minister of Construction and the Cuban Ambassador Extraordinary and Plenipotentiary to Vietnam 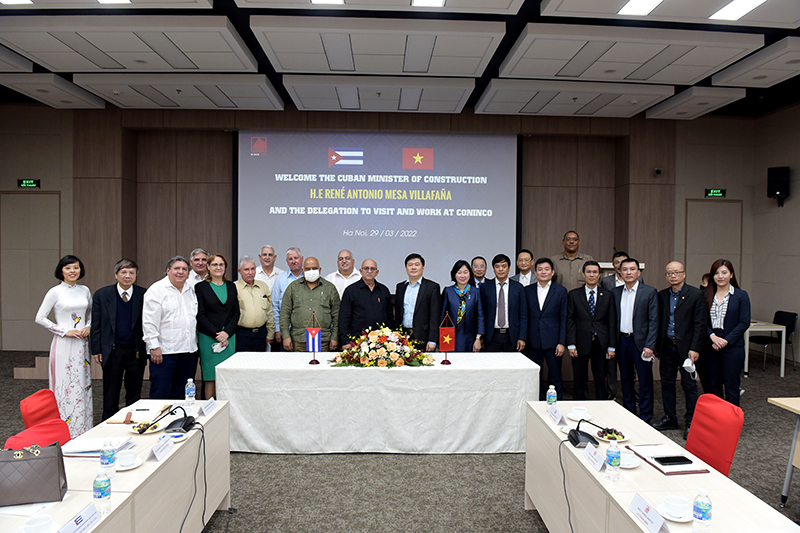 The Delegation of Cuban Ministry of Construction took photo with CONINCO

After the meeting, the delegation visited the area displaying images of key projects marked by the CONINCO brand name in all fields and visited the CONINCO design center. General Director Dr. Ha Minh hopes that with the sharing and cooperation in the spirit of brotherhood, experience and support from the two governments, not only between CONINCO and DINVAI but also between Vietnamese and Cuban enterprises will have growing cooperation, bring high economic efficiency in the near future. 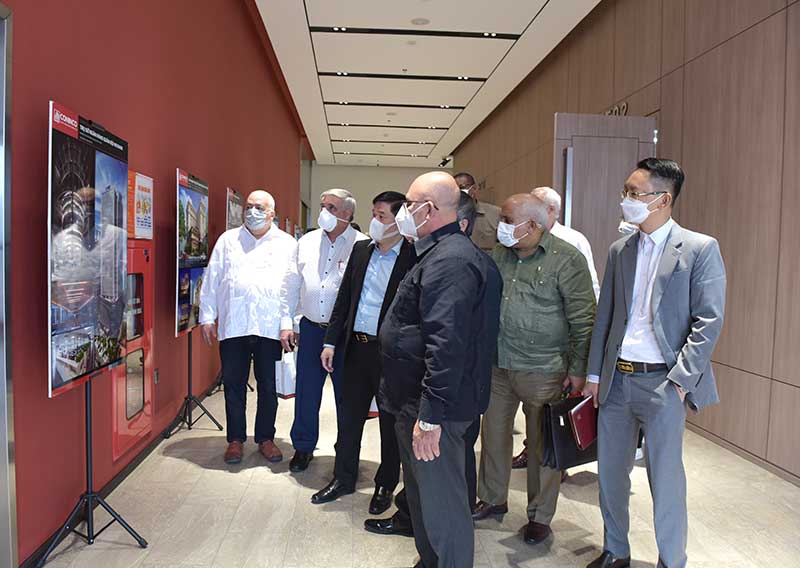 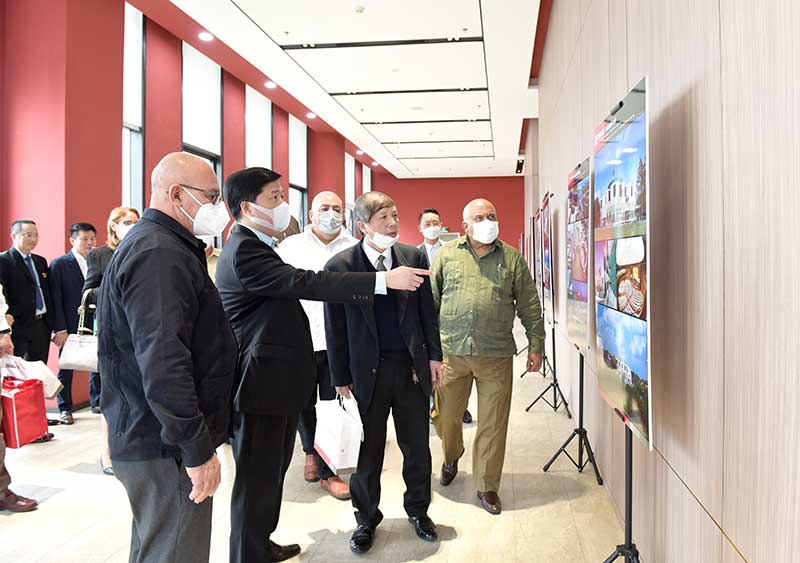 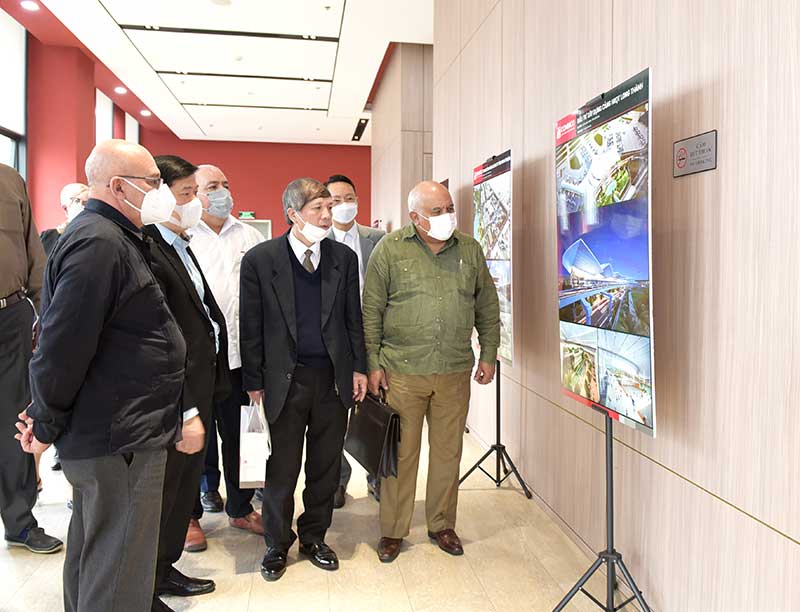 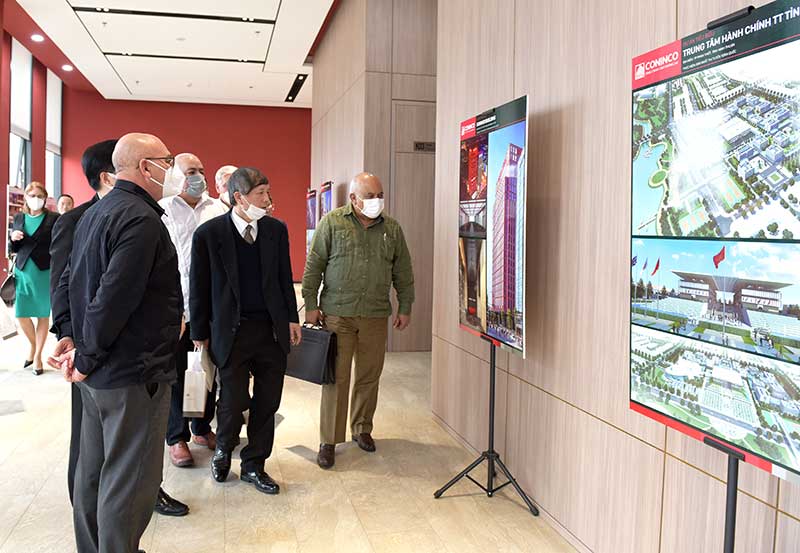 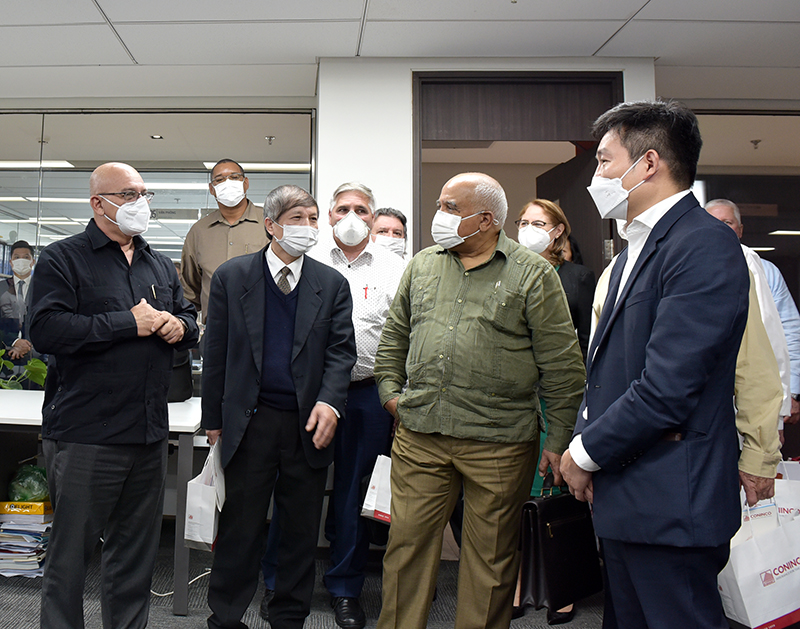 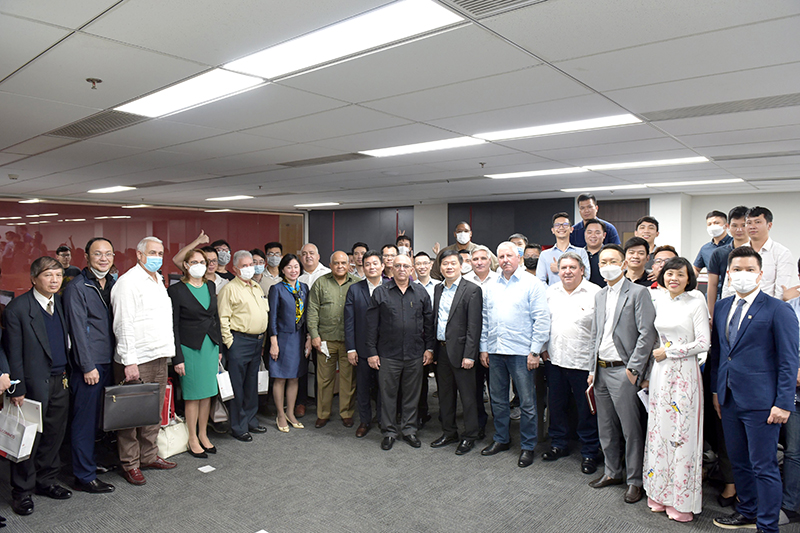 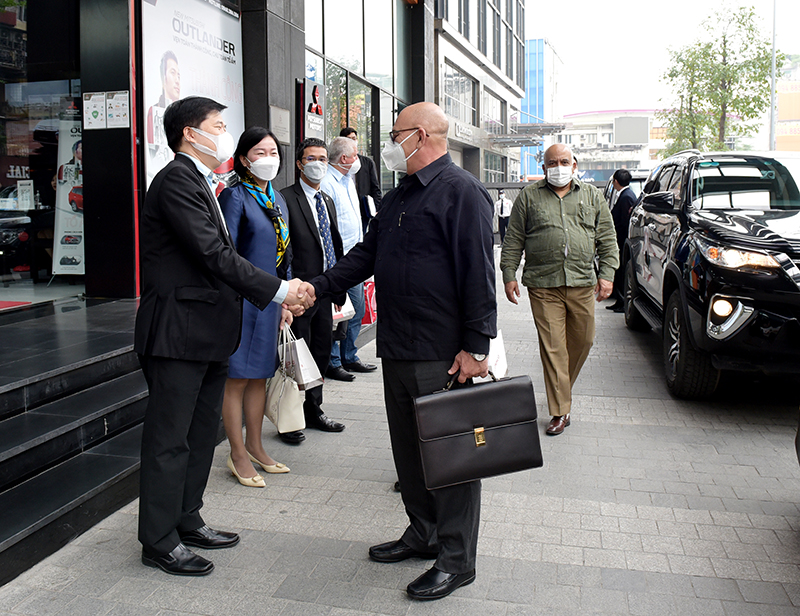 Thank the Minister of Construction, Ambassador Extraordinary and Plenipotentiary of the Republic of Cuba to Vietnam and all members of the delegation for visiting CONINCO, wish the delegation good health and success

The welcome meeting took place in a friendly atmosphere and ended successfully. The Cuban Minister of Construction thanked CONINCO for the warm welcome. The Minister and Ambassador Extraordinary and Plenipotentiary of the Republic of Cuba to Vietnam expect a stronger development between Vietnamese and Cuban enterprises in economic and trade cooperation, contributing to boosting the bilateral economy and maintaining a close friendship, which the leaders of the two countries assessed as a "Symbol of the times". CONINCO is honored to accompany Cuba in the process of development and global economic integration on the economic development of the two countries, towards a sustainable development for the future. Wishing the Minister, the Ambassador and the delegation good health and success.